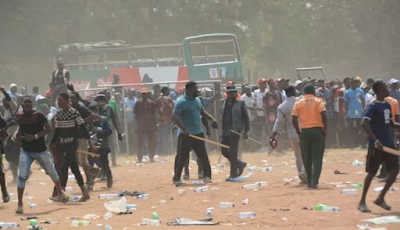 At least two people were killed while several others injured in a clash between hoodlums early Monday in Coker Aguda area of Surulere, Lagos.

Property worth several millions of naira, including cars were also destroyed during the violent clash that engulfed Adetola and Pako within the council area.

The fracas was attributed to a mere disagreement between two rival groups and spread like wild-fire to Enitan, Adefowope and Willy Omiyi Streets in Coker Aguda Local Council Development Area.

However, the early arrival of police and detachment of military personnel curtailed further damage and spread of the fracas in which dangerous weapons were freely used.


The residents who are nursing the fear of reprisal attacks has called on the state authority to immediately launch a manhunt for those behind the crisis.