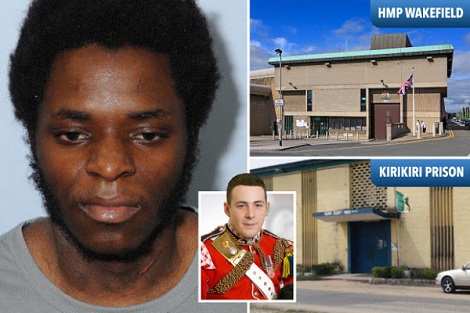 One of the men who hacked soldier Lee Rigby to death in 2013 is making a bid to serve out the rest of his sentence in a Nigerian jail with a VIP wing.

Michael Adebowale and Michael Adebolajo killed the fusilier near his barracks in Woolwich, South East London and the former was given 45 years in jail for his part in the bloody attack.

The 37-year-old is currently holed in in HMP Wakefield, otherwise known as Monster Mansion - but he wants to return to his parent's native land.

Adebowale has even written to immigration experts asking for their advice, according to The Sun.


Last night a source told the paper: 'Michael hates Wakefield. It's stuffed full of lags who see him as a top target.

'He thinks he can spend the rest of his sentence in Africa.'

It was also reported that Adebowale plans to seek a prisoner-swap deal to Lagos' Kirikiri jail where then-Foreign Secretary Boris Johnson also agreed to pay for a new £700,000 wing in 2014.

Since then, some lags have been able to go there to serve out their sentences but Adebowale's chances seem destined to fail as he wasn't born in the West African country.

Mr Rigby's mother Lynn reacted to the news, branding it an insult to her son.

She said: 'This is a disgrace and an insult to Lee. I'm sure he doesn't like Wakefield Prison but he has the luxury of being alive unlike my son who he stole from me.

'He should serve his sentence here and not try to exploit the law for a cushier life.'