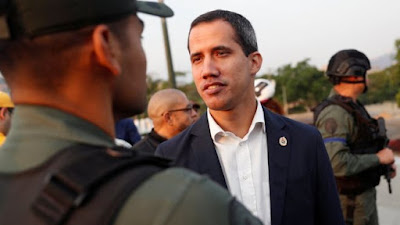 Venezuelan authorities say they are putting down a small coup attempt after opposition leader Juan Guaidó announced he was in the "final phase" of ending President Nicolás Maduro's rule.

He appeared in a video with uniformed men, saying he had military support.

Mr Guaidó, who declared himself interim president in January, called for more members of the military to help him end Mr Maduro's "usurpation" of power.

The military has generally supported Mr Maduro in the stand-off with Mr Guaidó.


But as resentment has grown following years of hyperinflation, power cuts, food and medicine shortages, Mr Maduro's detractors hope the military will change its allegiance.

So far, they have stood by Mr Maduro - despite dozens of countries, including the US and most of Latin America, recognising Mr Guaidó as Venezuela's rightful leader.

The world is now watching to see if Mr Guaidó's latest bid will be the moment Mr Maduro is toppled from power.