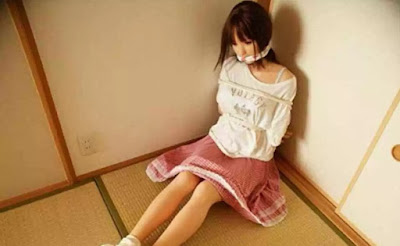 Amazon has been caught selling a "r*pe doll" of a life-size young woman who is bound and gagged.

The £61 doll, which some people claimed looked like a child, was removed from the site following a complaint that it was "nauseating" and being sold for "male s-xual abuse".

Photos show the “adult toy” with its hands tied around its back and a gag over its mouth.

The doll was described as being "flexible" and “safe and easy to clean”.  Buyers were advised not to “worry about twisting or tearing" the doll when using it.


The woman who made the complaint, who wishes to remain anonymous, told Amazon on social media they were selling “a s-x doll of a child, tied at her ankles, wrists, chest and gagged.

"A child, depicted as helpless and terrified in a corner. Sold for male s-xual (ab)use."

She claimed: "The doll is fitted with fully usable, realistic hairless s-x organs and the company is proud that it can withstand the weight of men weighing up to 380 lbs.

“I am shocked to my core that Amazon is selling this. No 'report' button, either!

“It pains me so much that we, as a society, are allowing this sort of thing to be sold at all. It appals me even more that they are sold so openly on a popular, family-friendly site such as Amazon, because that normalises the mentality that demands, creates, sells and buys such utterly nauseating products."

The product description outlines the specific details of the doll which include: “medical non-toxic super soft silicone, feels real. It is like leather without odor, safe and easy to clean.”

As well as describing the dimensions of the product, there was also details regarding how “flexible” the doll is. 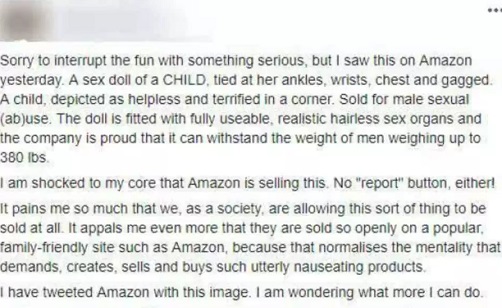 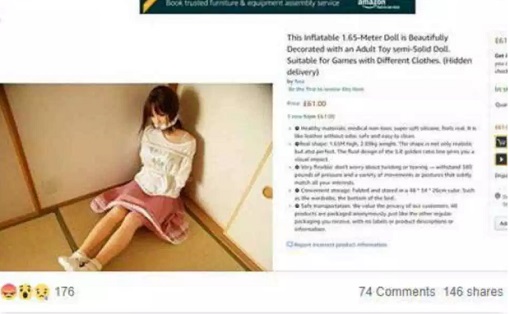 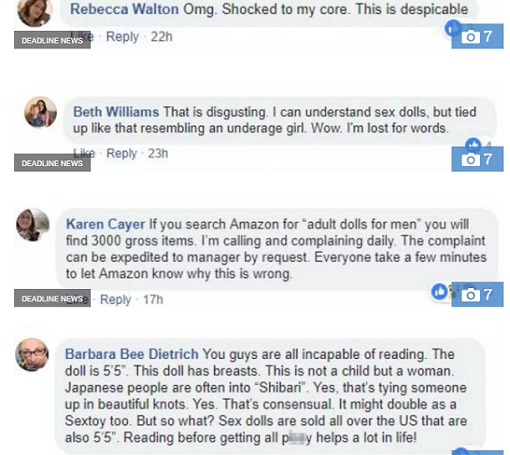