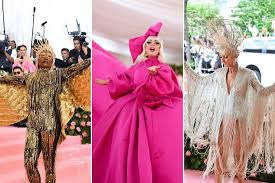 According to a representative for The Metropolitan Museum of Art, they were able to raise $15 million in just one night. The Met Gala is held annually as a way to help fund their yearly exhibitions, publications, acquisitions, and capital improvements.

This year’s theme was “Camp: Notes on Fashion.” Its theme was to particularly draw emphasis on sexuality, and society’s perception of it. It was inspired by an essay that Susan Sontag wrote in 1964.

And as usual, celebrities covered every inch of the red carpet– some adhering to the theme, while other’s just merely showed up. Lady Gaga was one of the people who showed up and stopped the show. She had several wardrobe changes. But perhaps she just wanted to set the standard for someone co-chairing the event. Lady Gaga, Serena Williams, and Anna Wintour were all helping to co-chair Monday night’s event.