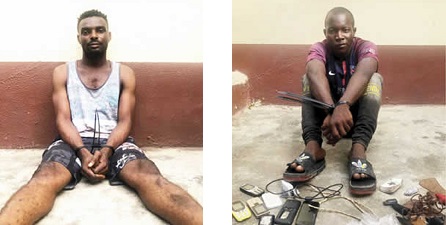 Operatives of the Lagos State Rapid Response Squad have arrested two suspects, Olukoya Ayodele and Victor Godwin, for allegedly peddling hard drugs in the Alausa area of the state.

The suspects were said to have been illegally running a distribution network of drugs.

Police operatives, who reportedly got a tip-off on their activities, arrested them while posing as potential buyers of the illicit drugs.

The suspects, in their confessional statements to the police, reportedly said they used to buy and sell different types of drugs, including hemp, skunk, Tramadol, Refnol, Diazal, among others, to factory workers within the vicinity.


Ayodele, who claimed to be a member of the Black Axe Confraternity, was allegedly arrested with charms.

The 26-year-old said he went into hard drugs because he was not making enough money as a conductor, adding that he made over N3.6m annually from peddling the drugs.

He said, “I use all these charms to protect myself from getting killed by rival cults. I learnt how to make charm from my father, who is an herbalist. So, it was easy for me to prepare various charms for myself and friends.

“After graduating in 2015, I came to Lagos in search of greener pastures. I first worked in a factory, but I left the work because it was too stressful. I later began to work as a conductor in the same area and added drug peddling to the job to augment my low income as a conductor.

“I make over N3.6m annually from the sale of hard drugs. I have been in the business for the past three years. The charms also helped me to transact my business and prevented me from getting caught by security operatives.”

Godwin, who owns a boutique in the area, said he sold the drugs to factory workers who used the substance to boost their energy.

The 30-year-old said, “I sell hard drugs to factory workers who use the drugs because their work is energy-sapping. I sell one capsule of Tramadol for N300, while hemp and skunk are sold for N100 respectively. The drug business is very lucrative, but I regret involving myself in it.”

The state Commissioner of Police, Zubairu Mu’azu, while urging youths to be creative, advised them to shun illegal ventures.

The suspects were said to have been transferred to the narcotic section of the command for further investigations.