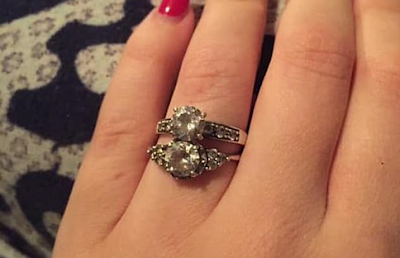 A bride-to-be was publicly 'ring-shamed' after admitting she wears two bands - because her fiancé couldn't choose between them.

The unnamed woman from the US had explained in an alternative social media post that her husband-to-be had initially proposed to her with a $10 (£7.63) sterling silver ring, which she wore for four months.

He then came home with a more bling alternative - a round halo diamond ring.

She said a few months later her fiancé then bought her a third ring - a 'rose' shaped design which she also put on her finger.


The bride-to-be explained: 'When I asked him which one he liked best for my engagement ring, he couldn't decide so I just wear both.'

Her confession was then screen-grabbed and shared on the Facebook group That's It I'm Ring Shaming: Can't Stop Won't Stop - where members didn't hold back in expressing their disdain.

The person who shared the bride-to-be's explanation along with a snap of her wearing the two rings, captioned their post: 'He couldn't decide so I just wear both. If you're gonna wear two engagement rings at least make them decent (sic)????'

It sparked a flurry of mean comments and reactions, with one suggesting her wearing two bands gave the impression she was 'engaged to two guys'.

Many failed to be impressed by either ring, and even more so her choice to wear the two of them on the same finger.

One Facebook user commented: 'I wouldn't wear either,' while another wrote: 'If you can't decide which one to wear, the correct answer is always neither!

'She can wear neither of those s****y rings and call it a day,' adding that the bride-to-be 'lacks any taste'.

Another reasoned: 'I get wearing them both but clearly the first one should be worn on a different finger. They look stupid worn together like that.'

And one wrote: 'Oh good grief, chuck them all!'

Among the 53 comments on the thread, a number of 'ring shamers' suggested the bride-to-be wears both rings on different days.

One commented: 'She couldn't just take turns wearing them on each day, this seems like a "I have money because I have two ER (engagement rings)".' 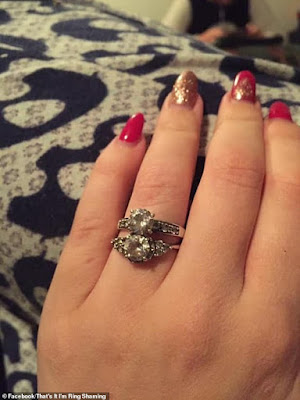