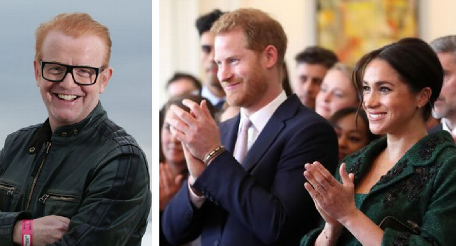 Chris Evans has dropped an enormous clue that Meghan Markle has already given birth to the royal baby .

Meghan and Prince Harry - the Duke and Duchess of Sussex - have been teasing fans with posts on their official Instagram , but as yet there's no sign of Baby Sussex, despite Meghan revealing she was due towards the end of April.


Now DJ Chris believes he "knows" something about the birth, which he said was given away by none other than the Queen herself.

"We sit here still finding ourselves. Some say minus a new royal baby or do we… ladies and gentleman?" he told listeners on his Virgin Radio Breakfast show today.


News presenter Rachel Horne asked him, "What do you know?" to which Chris replied: "I'm not sure what I know, but I think I know something."

Teasing his special secret, the radio presenter said he'd tell listeners after the next track - but Rachel interrupted and demanded to be given a hint.

"Well, there's more than a hint, what more of a hint do you want, other than the fact that I think there might be a new royal baby already?" Chris said.

"I'm just saying, I'm just putting it out there, right? The Queen has been to see Meghan and Harry!"