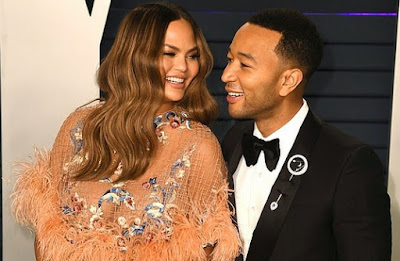 Chrissy Teigen has revealed husband John Legend was her 'strength' as she battled postnatal depression following the birth of daughter Luna.

The model, 33, praised her musican husband, 40, for being 'really watchful' over her when she struggled after first child Luna arrived in April 2016.

She told The Today Show: 'John and my doctors were my strength. I had such a good group of people that were around and people were really watchful of me.

Speaking of the debilitating condition, she continued: 'I had really changed. It wasn't just being tired, it was being really sad and hard on yourself and down on yourself.


It wasn't just the blues and a lot of us think it is the baby blues you are going through.'

The Sports Illustrated model said she initially thought it was 'natural' to feel that way but praised the people around her for helping her to realise it wasn't.

She said: 'It happened with my first one, with [my daughter] Luna. I just didn't know there was any other way to feel. I thought it was natural to be in this low point.

'I just assumed that was motherhood and no other way around it.

'Until people around me starting telling me they saw distinct changes in my personality that was really helpful to me...'

'Speaking to the women made me realise just what a different feeling it is - it's a unique experience that can be really tough. We encourage everyone to share their stories. Open up the dialogue so there is no stigma.'