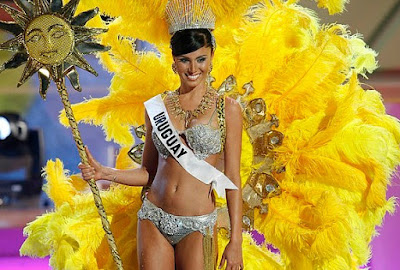 A former Miss Uruguay pageant winner has been found dead in a Mexico City hotel. Fatimih Dávila, who won the Uruguay pageant in 2006, was identified by city officials as the woman who was found hanged in the bathroom of a guest room early Thursday. She was 31.

There was no official ruling on the manner of death.

The prosecutor's office said a homicide investigation was looking into the circumstances surrounding the hanging and whether the woman killed herself or was killed.


After winning the national pageant, Dávila went on to represent Uruguay in the 2006 Miss Universe pageant, held in Los Angeles.

Since then, she had apparently worked as a model.

The Mexico City district attorney's office said Dávila had arrived in Mexico City on April 23 for a supposed job interview.

From the investigations carried out so far, it was established that an acquaintance helped her to settle in the aforementioned hotel,' the prosecutor's office said according to a press release statement.

Spanish-language press report that the hotel was located on Altadena Street in Colonia Nápoles, Benito Juarez.

The name of the hotel has not been publicly revealed.

Mexican authorities said they were in contact with the Uruguayan embassy in order to notify Dávila family.
at May 03, 2019