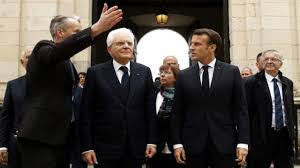 French President Emmanuel Macron and Italian counterpart Sergio Mattarella on Thursday kicked off commemorations to mark 500 years since Leonardo da Vinci died in France, paying their respects to the Renaissance genius in a show of unity after months of diplomatic tensions.

“The bond between our countries and our citizens is indestructible,” Macron said after the two men lunched at the Clos Luce, the sumptuous manor house where Leonardo spent the last three years of his life.
The two heads of state began their visit at the royal chateau in Amboise, where they laid wreaths at Leonardo’s grave.

The joint celebrations come after months of mounting diplomatic tensions between Paris and Rome over the hardline policies of Italy’s populist government and its support for France’s anti-government “yellow vest” protesters.