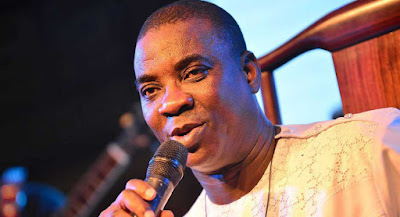 In a renewed bid and vigour to further expand his business horizon and interests outside his original thriving music career, acclaimed and undisputed King of Fuji music, Alhaji Wasiu Ayinde Marshal, popularly known as K1 De Ultimate, has just introduced his highly-successful bakery business to the Lagos market.

This is sequel to the one he earlier opened in his country home Ijebu Ode, not too long ago. The new massively hi-tech confectionary outfit, aptly called Anjola Bakery, named after one of his beloved daughters, Anjolaoluwa, has since commenced baking for the Lagos market and promises to be a Mecca of sorts for lovers of pastries and related baked items.

The elitist bakery is audaciously located on the popular Adeniran Ogunsanya Street in Surulere, Lagos Mainland, where numerous people have been thronging since it opened a shop for business days back.
Still in the attitude of broadening his business frontiers, a unique and bourgeois Coffee Shop, which
K1 plans to open at almost every corner of the City of Aquatic Splendor, has also opened for business.

The coffee shop, which also has its office in the same Adeniran Ogunsanya building that houses the bakery will be dispensing Nespresso to compulsive coffee lovers in a very comfortable and conducive atmosphere. just as the bakery and the coffee shop are opening for business, another branch in the heart of Ikorodu is on the verge of opening too.

K1, who spoke about the new business outfit, says, he has a dream of being the best in coffee shop ownership in the country and will do everything humanly possible to attain this height, all things being equal and Allah helping him.