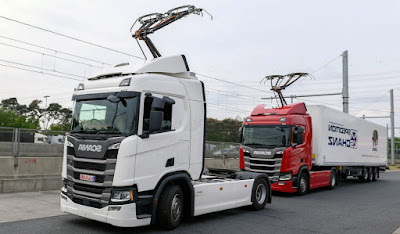 Many of us have come across a train or bus that takes advantage of overhead power lines, pantographs stretched upwards, providing the vehicle in question with the electricity needed to continue on.

Now, the first eHighways in Germany will help electrified trucks roll down the highway without contributing to air pollution.

The German state of Hesse on Tuesday opened its first stretch of eHighway, featuring overhead power lines meant to deliver charge to electrified trucks as they travel.


It's still in the pilot phase, covering just a six-mile stretch of autobahn near Frankfurt, but it will function with normal traffic operating around the trucks that can take advantage of the tech. It'll stay there until 2022, at which point the German government will determine whether to expand the project's scope.

It works just like the overhead power lines you're used to seeing on other methods of transportation. An electrified truck extends conductor rods to the power lines, creating a connection where power can flow from the lines to the truck's batteries, giving it enough juice to operate on electricity alone.

Once the car disconnects from the system, its hybrid system will function like normal. It's worth noting that the trucks need to be moving no faster than 90 kilometers per hour (about 56 mph) to take advantage of the power. Of course, not every truck comes equipped with the hardware to make this work, so Germany partnered with VW Group to build a hybrid truck specifically for the eHighway.