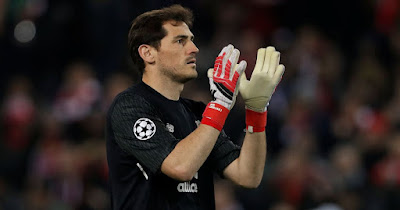 Iker Casillas has suffered a heart attack and has been rushed to hospital. His club Porto confirmed the news after the goalkeeper suffered chest pain during a training session on Wednesday.

The Real Madrid legend underwent surgery but is now in a stable condition and is recovering at Hospital CUF in Porto.

He is expected to be ruled out for the rest of the season. Porto released the following statement: "Iker Casillas suffered an acute myocardial infarction during morning practice this Wednesday, at the PortoGaia Sports Formation and Training Centre, in Olival.

"The work session was promptly interrupted so that assistance could be given to the FC Porto goalkeeper, who is at this moment at the CUP Porto Hospital. Casillas is fine, stable and with his cardiac problem resolved."