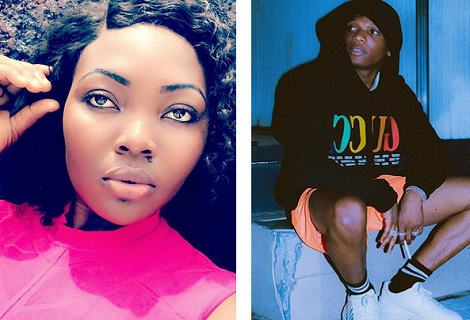 Twenty two year old Nigerian actress, Uche Okoye, has issued a one-week ultimatum for Wizkid to follow her on Instagram or else she will commit suicide.

According to her, she has been a fan of Wizkid for a while and he has been messing with heart by ignoring her.

“You can’t be messing with my heart and expect me to layback. No, I’ve heard it up to my neck,” she ranted in the video.

“Wizkid, you can’t be messing with heart like that now… No, check it, is it right? Is it proper, no. I told this dude I like him and I have been tagging him. You won’t say you don’t know me, you understand and you’ve been acting up.


“Today na today we must settle it today.  I give you one week for you to follow me back or post my picture on your page. Or else, I’m sure you know what this is meant for? (Pointing a pistol on her head), I will kill myself.”

While Wizkid is yet to respond, Okoye’s timeline has generated punitive responses from the megastar’s fans.

A fan with Instagram handle, @oluwatowojusamuel112, wrote: “Wow…. Seriously @realokoyeuche madam it better u sit back and think about wat you are saying because Life is more than wat u are thinking it is.”

“Die, I get better gun for house, you fit come, make I give you….wizzkid no be your mate,” while Akizedammy wrote: “@wizkidayo Boss, Abeg follow this babe make she no kill herself ooo.”

Also, Official_fatai_peter wrote “Please sister die because of wizkid and go to hell by that time you will wants Jesus to follow you @realokoyeuche,” while joycee_okoro wrote: “Later when u get pregnant and he’s not taking care of u, u’ll start calling him irresponsible,, oloshi…. Kee urself na. Is its by force to follow someone,,, mtcheeeeew ode,,, with ur fake English.”

Months back, the budding actress she revealed that she is ready to carry the fourth child of the singer.