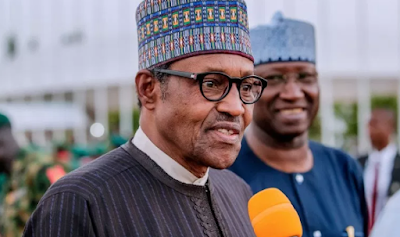 President Muhammadu Buhari has said that the Acting Inspector-General of Police was working hard to curtail insecurity in the country which has made him to lose weight.

President Buhari also said that as he was back from a 10-day private visit to London, the United Kingdom, UK, he hoped that Nigerians would allow him to settle down and set up his cabinet.

The President who spoke to the Nigeria Television Authority, NTA, oh his arrival at the presidential wing of the Nnamdi Azikiwe International Airport Abuja also declined to disclose whether he would have an extended cabinet in his second tenure that starts from May 29.

While wishing Nigerians the best of luck as he returned from his trip, he appealed to Nigerians to allow him settle down to do the work he was elected to do.


Asked on what kind of people expected to makeup his cabinet and whether he would have and whether there would be an expanded cabinet, he simply replied “I won’t tell you.”

Also asked to comment on the insinuation that he decided to travel out of the country to prepare the list of his cabinet for his second tenure, he said, “I didn’t discus it with anybody so I don’t know how they got the information”.