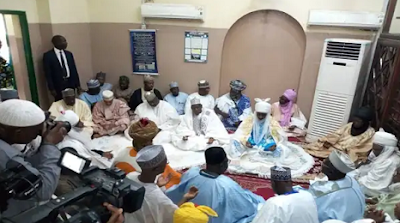 The Emir of Kano Malam Mohammad Sanusi ll, today charged couples in the state to always respect the bond of marriage.

The Emir gave the charge during the inauguration of mass wedding of 1,500 couples sponsored by Kano State government at the central mosque Kano.

He implored them to live a peaceful married life full of love and happiness.

The Emir said the emirate had constituted a committee of Ulama which has designed a married law, aimed at curtailing the challenge of frequent brake up of marriages.

Governor Abdullahi Ganduje said his administration had spent over N30m in providing furniture’s and payment of dowry for the groom’s.

He said the gesture was targeted at alleviating the sufferings of the populace.

The marriage contract was presided over by the Chief Imam of Kano central Mosque Professor Mohammad Sani Zahradeen .

Among the newly married, Musbahu Danjuma and sabiu Abdullahi hailed Ganduje’s administration for the kind gesture and promise to respect the marriage through adequate care of their spouses.

The marriage processions were conducted in all forty four local government areas of Kano.