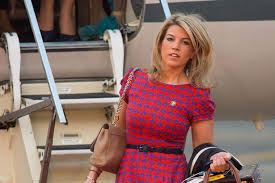 A stylist credited with overhauling Kate Middleton's wardrobe became a member of the Royal Victorian Order during a ceremony at Buckingham Palace.

Natasha Archer was given the honour after being named in the New Year's Honours list 2019 for her services to the royal family.

Pictures uploaded to social media show a beaming Ms Archer at the Palace for court proudly displaying the medal bestowed to her by the Queen.

Another picture showed her with her four-month-old son Theo during a celebratory lunch at the Goring Hotel in west London.


Both snaps were taken by husband Chris Jackson, a world-renowned Getty royal photographer, whom she has been married to since 2017.

For a decade, Ms Archer has travelled around the world with the Cambridges on official tours to help co-ordinate her wardrobe.

The new mum has been working with the royal family since 2007 and was originally Kate's PA.

In 2014, she was promoted to Kate's style advisor and was frequently spotted lugging around cases and suit bags on royal tours.

She has played an important role in William and Kate's lives - predominantly assisting the duchess with her style and travelling the world with the couple on official tours. Big congrats to her.