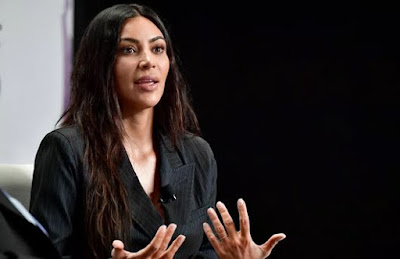 Kim Kardashian has revealed she is willing to give up her highly lucrative media career in order to focus on the rather more challenging task of prison reform, and has already taken on an apprenticeship at a law firm.

The TV personality is keen to emulate late father Robert Kardashian by studying law, and has been buoyed by her successful campaign to free Alice Marie Johnson.

Johnson was serving a lifetime sentence for a non-violent, first time drug offence until Kim, 38, petitioned President Donald Trump for her release from Aliceville Correctional Facility in Alabama.


Speaking on the latest episode of Keeping Up With The Kardashians, the reality star admitted she was studying law while juggling her responsibilities as a working mother of three.

It’s kind of crazy because I’m learning it all as I go,' she explained. 'I spend more time on this than I do anything else. It’s insane but it’s so fun to be around people that are super smart and get it and want the same thing.'

Kim's passion for law was inspired by her father Robert, who famously formed part of OJ Simpson's defense during the disgraced former sportsman's trial for the murder of ex-wife Nicole and her friend, Ron Goldman.

But she admits her father, who passed away in 2003, was not keen on her decision to follow him into law when she broached the subject with him.

'I told my dad years ago that I was really into criminal justice and he was like, "This will stress you out so much, you do not really want to take this on,"' she recalled.

'My dad always taught me that hard work is really important and to really commit to things, so my goal would be in like, 10 years, to give up being Kim K and just focus on this and be an attorney and fight for so many deserving people.'