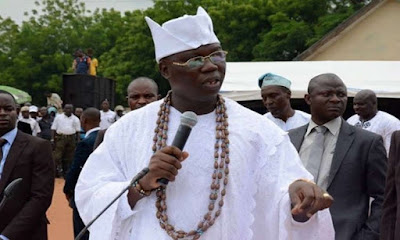 The Aare Ona Kakanfo of Yorubaland, Iba Gani Abiodun Ige Adams, has said leadership, not religion, is the nation’s problem.

He said no religion that is worth practising will appreciate the senseless killings by Boko Haram.

Adams, who spoke at the National Headquarters of the Redeemed Christian Church of God, (Throne of Grace), Redemption Way, Ebute Metta, Lagos, said religion is all about faith.

Admitted that he is a Muslim by birth, he described himself as thoroughly–bred in Christian and traditional religions.

He said: “It is sad that many people believe religion is Nigeria’s problem, but in truth, leadership, not religion, is the problem. For instance, I am a Muslim by birth, I grew up from a Christian background and as the Aare Ona Kakanfo of Yorubaland and culture activist, I also believe in our traditional religion. So coming to the Redeemed Christian Church of God headquarters today is a pleasure, and one needs to appreciate God for the life of the General Overseer worldwide, Pastor Enoch Adeboye, for keeping faith with God for over 40 years, with branches in over 200 countries across the world.”v