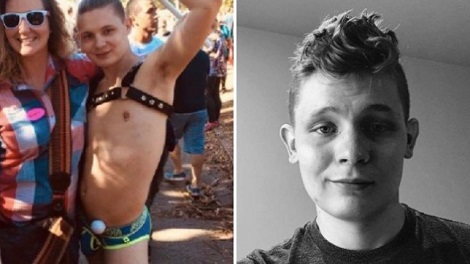 A man chopped off his own p-nis and testicles because he wanted to become a genitalia-free ‘nullo.’

Trent Gates, 23, severed his testicles in April 2016, then removed his manhood with an ultra-sharp ceramic knife in January 2017 after seeing a photo of another famous nullo called Gelding at the age of 15.

Trent, from Washington DC, only used iced water for the first procedure, but performed the second removal after after taking regular painkillers to counter the pain.

Recalling what made him decide to remove his genitalia in his first ever interview, Trent told Metro US: ‘It really didn’t feel like part of me. It’s along the lines of being trans, but not quite. ‘I have no desire to be a woman. It’s kind of a middle ground in-between the two, an androgynous in-between.


‘I came across some pictures when I was in high school, online, and I’ve been that way since, back since I was probably, 15. ‘I saw a photo online – it was like, bam, first photo I saw, thats me, I want to be there some day. ‘I think it was a photo of (famous nullo) Gelding.

He’s kind of like the grandfather of the community.’ Trent describes himself as a non-binary person who is sexually attracted to men. But he does not like the pronoun ‘they’ and says he feels more male than female.

He says that nullos are different to eunuchs – men who were historically castrated to guard female living areas of royal courts – because they have their penises removed too.

The IT worker sliced his testicles off at his apartment, and later removed his p-nis in a North Carolina hotel room after meeting a local ‘spotter’ online who agreed to call an ambulance if he suffered a medical emergency. He used a knife sanitized with alcohol, then traveled to hospital immediately after on both occasions, where a surgeon stitched him up and gave him painkillers.

He talked to a mental health team about his decision to remove his genitals. Trent also took photos of the process, which are too graphic to reproduce.

The IT worker recalled: ‘I used a ceramic (knife) because its sharper than the steel, less ripping and tearing. ‘I sanitized it all beforehand with alcohol. I took every precaution. I had no infection. I went to the hospital right after.

Trent says the wound where he removed his testicles took a month to heal, while the area where his penis once sat recovered in around to to three weeks. He inserted a catheter for several weeks after removing his p-nis to ensure there was a hole through which he could urinate. Trent says he enjoys sex even more now he has no penis or testicles, explaining: ‘I’ve actually found that my orgasms have gotten a hell of a lot more intense.

‘The first time that I had s-x afterwards, I almost passed out and was shaking for hours afterwards.

Trent says his boyfriend fully accepts his modified genitalia. He did not tell his parents about removing his privates until after he had done so, and he has not told his three younger brothers about the makeshift surgeries.