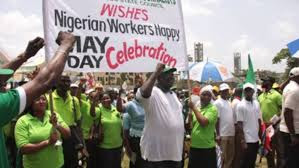 The Peoples Democratic Party, PDP, has lauded Nigerian workers on the occasion of 2019 Workers Day, for their service towards the development of the nation.

The party also acknowledged the patriotism and resilience of the workers, particularly for remaining steadfast to the course of nation-building, regardless of the prevailing economic condition of the times.

In a statement issued by its spokesman, Kola Ologbondiyan on Tuesday, the PDP said it was “unfortunate that Nigerian workers found themselves operating under an inept administration that does not appreciate their inputs; that has no tangible strategy for their much-needed capacity building and reward system, but only relishes in Greek gifts and official bullying.

“The PDP cautions against such unproductive tendencies, adding that the N30,000 minimum wage should not be a justification for any form of bullying or victimization against the workers.”