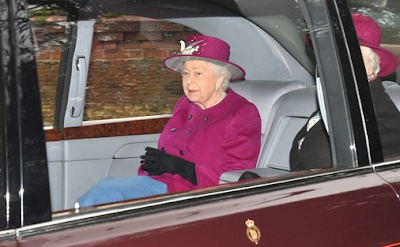 Meghan Markle and Prince Harry have said they don't know if their royal baby is a girl or a boy - but many of their fans don't believe them.

They've been on the lookout for any sort of clue or hint about the gender of the newest member of the family.

The latest 'sign' that the royal baby has already been born - even though the palace has said Meghan has "categorically" not given birth - was a slow-moving Bentley being escorted towards Windsor Castle.

Driver Tamoor Ali, who saw and filmed the escort, was originally convinced the Duke and Duchess of Sussex have welcomed a baby girl and that the motorcade was the couple on their way home from hospital.


However the Palace said this wasn't correct, and that the car was actually taking the Queen to present a service of the Royal Victorian Order at St George's Chapel in front of 1,200 people.

But before the excitement died down completely, people started to focus on what was inside the car.

Tamoor told the Sun: "Then we saw a vehicle that had pink paraphernalia at the back of the windscreen go past - it was going very slowly over speed bumps."

Some people believe that the pink items might be a sign she's having a little girl - even if she hasn't arrived yet.

But Meghan and Harry have outright said they didn't find out the gender of their baby, saying they wanted it to be a surprise.

Meghan is now believed to be a week overdue with her first royal baby , but the Duchess is apparently taking the whole thing in her stride.

The coupld are reportedly "happy and relaxed" as they wait to meet their little one .