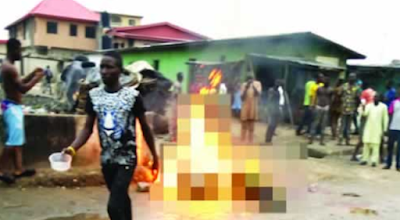 A yet-to-be-identified man has been set ablaze for allegedly burgling a branch of the Redeemed Christian Church of God in the Somolu area of Lagos.

It was gathered that the suspect was among a three-man gang which burgled the church on Olorunkemi Street, Bariga.

Punch Metro learnt that the gang members were making away with the stolen items when they were challenged by some members of the community.

While two of the robbers escaped, the mob caught up with the third suspect and set him ablaze.

A resident, Ibrahim Olasunkanmi, said he had just returned from the mosque when he heard people raise the alarm in the early hours of Saturday.

He said, “I just got back from the mosque and was about to go to bed around 5.30am when I heard a noise from a distance. Out of curiosity, I went to the scene and saw someone being set ablaze.

“I later learnt that he was a member of a three-man gang which had gone to steal some musical instruments from an RCCG church on Olorunkemi Street, and while they were carting away the items, some guys ran after them. Two of them ran away, while the third suspect withstood the mob because he probably had a charm on him. At first, people were afraid to get close to him. When they eventually caught him, they descended on him. Before the police and the Lagos State Ambulance Service arrived, he had been set ablaze.”

The Police Public Relations Officer, DSP Bala Elkana, who confirmed the incident, said the suspect was still alive and recovering in a hospital.

He noted that the suspect had yet to give any information to the police.