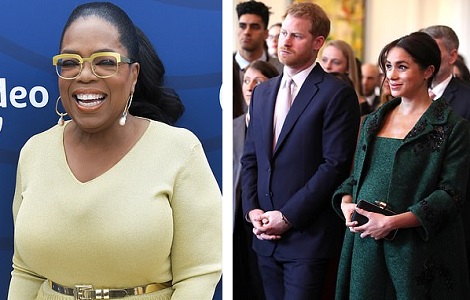 Oprah Winfrey already has picked out gifts for Prince Harry and Meghan Markle's baby. Winfrey, 65, told Access Hollywood Tuesday that she's mapped out her course of gift-giving when it comes to her royal friends.

'I have a standard gift that I do for people that I really care about,' the legendary TV star said. 'So I don’t know the baby’s name or the baby’s gender, but this baby will have enough books to last a lifetime!'

The iconic talk show personality, who was at the wedding between the prince and the Suits actress in May of 2018, chat with the outlet at Los Angeles's Milk Studios, where she spoke at - and was honored at - an Empowerment in Entertainment Event thrown by The Hollywood Reporter.


Oprah also spoke with E! News about an endeavor she and Prince Harry are involved in for Apple, centered around mental health.

'We're excited to be exploring it together - he's a true partner,' the star revealed, adding that the prince is a diligent colleague who 'does answer emails' in quick fashion.

'Every week we do a weekly update letting him know where we are, directors we've spoken to, how many people we're planning on bringing on board and what we're thinking of naming it,' she said. 'He weighs in. He always has something to say about everything.'