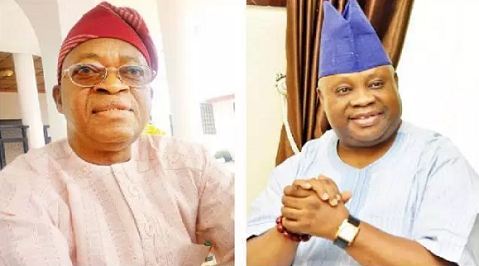 The Osun State Governor, Adegboyega Oyetola and the Peoples Democratic Party, PDP, in the last governorship poll in the state, Ademola Adeleke will know their fate on Thursday as the Abuja Division of the Court of Appeal is set to deliver judgment.

The court, on Wednesday, issued hearing notices for the judgment and had them served on all the parties to the four pending appeals relating to the disputed poll.

A five-man panel led by Justice Jummai Sankey had, on April 24, heard three appeals and a cross-appeal filed in relation to the Osun State governorship election and reserved its judgments on the appeal.


With Justice Sankey presiding, other members of the appeal panel which heard the four appeals were Justices Abubakar Yahaya, George Mbaba, Isaiah Akeju and Bitrus Sanga.

At the hearing on April 24, Oyetola of Osun State, his party, the All Progressives Congress, and the Independent National Electoral Commission urged the court to upturn the March 22, 2019 majority judgment of the state Governorship Election Petition Tribunal, which nullified the governor’s victory at the September 2018 poll.

But the PDP and its candidate,  Adeleke, who were declared the winner of the election by the tribunal, urged the Court of Appeal to affirm the tribunal’s judgment.

INEC had declared Oyetola and the APC the winner of the Osun State governorship election on the basis of the cumulative results of the September 22, 2018 main election and the September 27, 2018 supplementary poll.

Dissatisfied with the result declared by INEC, the PDP and Adeleke had filed their petition before the three-man Osun State Governorship Election Petition Tribunal, contending that they were the true winner of the election as they had already won after the September 22, 2018 poll and that there was no need for the supplementary election held on September 27, 2018.