Parents of 16-year-old runaway bride who eloped with lover are told to pay £3,600-a-year in CHILD SUPPORT 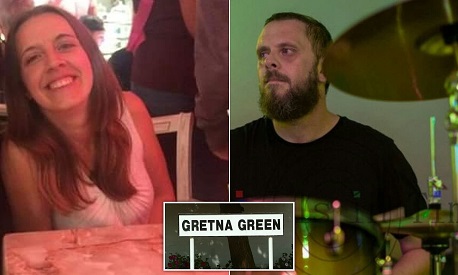 The parents of a teenage girl who went to Gretna Green to marry an older man were left stunned when they got a letter demanding they pay child maintenance for her.

Claire Milliner, 42, and Martin Chambers, 47, were shocked when their daughter, 16, ran off to Scotland to marry Thomas Arnold, 27, last December.

The pair met on an online dating app and travelled to Gretna Green where it is legal to get married at 16 without parental permission.

But her parents, of Cinderford, Gloucestershire, couldn't believe it when they received a letter from the Child Maintenance Service requesting they pay £3,634.84 a year towards their child's 'upkeep'.


They believe the request came from their son-in-law, who is a father himself.

Ms Milliner told The Sun: 'I couldn't believe it. She's still studying to do her GCSEs and he married her — and now has the nerve to ask for child maintenance. She's his wife!'

The mother added that she 'didn't take it seriously' when her daughter started dating an older man.

It was her first boyfriend, so she didn't see their plans to get married coming, she told the newspaper.