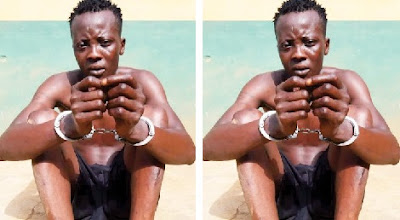 The police in Ogun State have arrested a 28-year-old man for allegedly stabbing his friend to death.

Oni Olohunwa was alleged to have stabbed Baraka Taiwo in the chest on Sunday evening, as they were returning from a party.

It was gathered that the deceased was drunk and was behaving abnormally, which led to an argument when Olohunwa was trying to control him.

A fight was said to have ensued and Olohunwa allegedly stabbed Taiwo with a knife in the chest and back.


Confirming the incident, police spokesman Abimbola Oyeyemi, a Deputy Superintendent (DSP), said a report was made at Ogijo Division by Mr. Wasiu Raheem, who brought Taiwo to the station.

“On the strength of the report, the Divisional Police Officer (DPO) Ogijo, Baba Muhammed, a Chief Superintendent (CSP), detailed his detectives to the scene where the suspect was arrested.

“The victim was taken to a nearby hospital, but died while receiving treatment. His body has been deposited at the Olabisi Onabanjo University Teaching Hospital (OOUTH), Sagamu for autopsy.

“Police Commissioner Bashir Makama has ordered the transfer of the suspect to the homicide section for further investigation and prosecution,” he said.