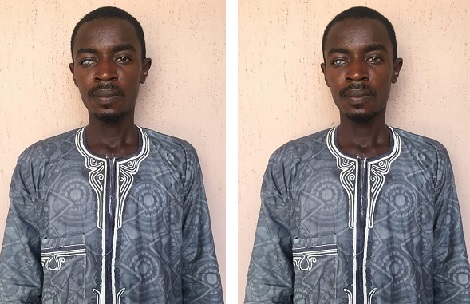 Operatives of the Economic and Financial Crimes Commission have arrested an alleged serial cash transfer fraudster, Bashar Abdullahi, (a.k.a.  Abdu Abdullahi and Bashir Abdullahi) who defrauded some unsuspecting victims of N151,000 at the ATM galleries.

One of the petitioners, Tukur Achida, alleged that on March 16, 2019, he went to a Zenith Bank ATM point along Abdullahi Fodio Road, Sokoto, to withdraw money from his account, where he met the suspect who  he asked for assistance.

He alleged that on reaching his home, he realised that Abdullahi had transferred N20, 000 out of his Zenith Bank account to his own account.


During the course of investigation, two other complaints were received by the EFCC against the same suspect.

One Sada Abubakar also reported to the Commission that on Sunday, April 28, 2019, he went to Polaris Bank ATM point at Dogon Daji House, Sokoto, for  some transactions.

Unable to operate the machine, he was allegedly approached by Abdullahi who offered to assist him.

He alleged that he gave him his ATM card and other information, including the details of the account to which he wanted to transfer the money to.

Abubakar said that to his surprise, Abdullahi had fraudulently transferred the sum of N50, 000 to a Jaiz bank account in the name of Bashar Abdullahi.

Upon the receipt of the complaint, the  Commission spokesman, Tony Orilade, said EFCC detectives despatched an investigator to Jaiz Bank, who laid in wait for the suspect.

Orilade said in a statement, “However, it happened that one Tukur Ibrahim, another victim of Abdullahi showed up in the bank, complaining to the bank officials that on Wednesday, May 1, 2019 he went to the ATM point to make withdrawals and that someone borrowed his mobile phone on the ground that he wanted to use its calculator.

“Ibrahim soon found out that the person had made away with his phone and later realised that N81, 000 had been transferred from his account using his missing mobile phone.

“When the bank officials investigated the transaction, it was discovered that the amount was transferred by the same Abdullahi to his own account.”

Investigations revealed that there were several other ATM transfers into  Abdullahi’s account from different victims.

The anti-graft agency said Abdullahi while confessing to the crimes, revealed that his modus operandi was to loiter around ATM points and take advantage of people.

The commission explained that the suspect would soon be charged to court.