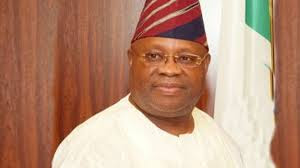 Senator Ademola Adeleke has been arrested by men of the Nigeria Police Force.  The lawmaker was taken into custody on the evening of Monday, May 6. Adeleke’s arrest was affirmed by the force spokesman, Mr. Frank Mba.

He said: “Senator Adeleke is currently in police custody. He was taken into custody in the evening of today 6th May 2019 in connection with ongoing criminal investigations touching on his person.

“Meanwhile, in the best tradition of natural justice and fair hearing, he has already been served with the relevant charge sheet containing his alleged offences in the presence of his Attorneys. He will be arraigned in a competent court of law tomorrow, 7th May 2019.”


However, the Ademola Adeleke Governorship Campaign Organisation had a slightly different report regarding the lawmaker’s arrest.

The Senator’s campaign organisation claimed that the police detained the parliamentarian on old trumped up charges of certificate and testimonial forgery.
at May 06, 2019