Video about Bobrisky was for posterity sake – Charles Anwurum 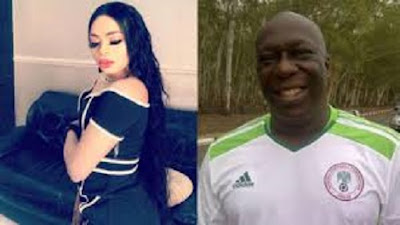 Comic actor, Charles Anwrum, recently took to his social media page to express his resentment against how some movie producers now feature the popular cross-dresser, Idris Okuneye, popularly called Bobrisky, in their movies.

Anwurum couldn’t hide his feeling as he described featuring the cross-dresser in movies as a shame to the industry. After he shared the video, Bobrisky replied him with a post on his Instagram page, in which he insulted the comic actor.

In an interview with Saturday Beats, Anwurum noted that he made that video to state his displeasure with the situation and for posterity sake.

“I don’t even want to make further statements about this issue. What I said was for posterity sake. When they started producing pornographic movies in Asaba, I was one of the people who cried out about it. I don’t want to make further statements about Bobrisky; I just aired my opinion about the movie industry. Our movie industry is turning into something else.


“People now want to make money anyhow because there isn’t much money in the industry anymore. The industry is not making money; instead of being paid for their services; they pay to render their services,” the actor said.

He further stated that it was disheartening that the movies being churned out by the Nigerian movie industry lack good storylines.

“There was a time I was watching a movie and the theme and plot of the movie were not properly organised. The scenes were not synchronised at all.  Our movies now lack good stories; the themes are disjointed. Our television stations air these movies without vetting them.

“All these sex scenes are not part of our culture. People are free to live their lives the way they want but they should bear this in mind – promoting cross-dressers will cause the next generation to buy into it. One day, a President will just approve homosexuality. That is what I am bothered about; I didn’t mean to insult anybody. That was a comic way of passing my message across. Anybody can go to hell if they want to,” he told Saturday Beats.

He further identified some of the implications of featuring a cross-dresser in movies, something he described as totally unacceptable.

“Featuring a cross-dresser in a movie can be a comic way of achieving a storyline. The viewers would understand that the individual is a man who is trying to play the role of deceit in the movie. Another instance is writing a script that preaches that being gay is a sin. These kinds of storylines are acceptable. However, it is not acceptable to feature someone who used to be a man and disfigured himself into a woman,” he said.