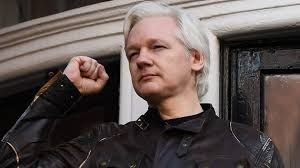 WikiLeaks founder Julian Assange will be sentenced Wednesday  for breaching a British court order seven years ago, when he took refuge in Ecuador's London embassy to avoid extradition to Sweden.

The Australian whistleblower, who was arrested on April 11 after Ecuador gave him up, could face a 12-month prison sentence when he appears at Southwark Crown Court at 10.30am local time (0930GMT).

Assange fled to the embassy in 2012 after a British judge ordered his extradition to face Swedish allegations of sexual assault and rape, which he strongly denied.

He claimed the allegations were a pretext to transfer him to the United States, where he feared prosecution over release by WikiLeaks of millions of classified documents.


There is no longer an active investigation in Sweden and the extradition request has lapsed.

However, the 47-year-old is facing a US extradition request, which was only revealed following his dramatic arrest, when he was dragged shouting from the embassy by police.

Assange appeared in court within hours of his arrest, and a judge found him guilty of breaching his bail conditions.