Youths to El-Rufai: Don’t disgrace yourself 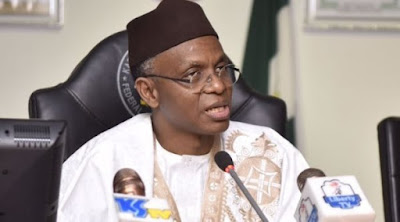 Addressing reporters in Lagos, the council’s president, Aremo Oladotun Hassan, said the statement credited to el-Rufai saying he would teach Lagosians how to end Godfatherism was “abysmally insulting”.

Hassan queried why the governor would leave his Kaduna State, which is under intense insecurity and fears.

He said el-Rufai lacked the credibility to utter such seditious statement in a Yoruba land.


The youth leader wondered how someone, who ought to focus on how to end insecurity and abject poverty ravaging his state and region,  would “come to the megacity, the Centre of Excellence and the commercial nerve centre of Nigeria and Africa’s emerging economic hub to claim he wants to end Godfatherism”.

Hassan said: “Even as he claimed that he had ended Godfatherism in Kaduna, we are yet to see the benefits of his political victory in the lives of the people of Kaduna and the development of the state, unlike Lagos where our progressive leader of leaders has great successes to show.

“Our so-called ‘Godfatherism’ system helped in sustaining the struggle against opposition in Nigeria and led to the building of the strong political party, the All Progressives Congress (APC), that made it possible for the enthronement of President Muhammadu Buhari, which also helped the same el-Rufai become the Kaduna State Governor.

“Our so-called ‘Godfatherism’ helped sustain Lagos as the commercial hub of Nigeria and the fifth largest economy in Africa.

The youth leader said his members would reject any attempt by any individual, no matter how highly placed, to intrude or disrespect political leaders in the Southwest.

He added: “Governor el-Rufai is renowned for being too overzealous for power. He is a harbinger of crises. Hence, his previous contemptuous stands on issues of national development, being override with his penchant for ethnic bigotry and indiscriminate devaluation of humanity. We condemned his crocodile tears in its entirety.

“Nigerians still kept fresh in their memories the hate speech and treasonable felonious statements credited to Governor el-Rufai on threats of mass genocide and killings in body bags he issued to international observers during the last 2019 election, a repetition of what is happening in Southern Kaduna, which almost caused the nation a huge embarrassment and a disaster, if not for our intervention as future heirs of Nigeria.

“Going back to memory lane, we cannot forget in a hurry the double jeopardy situation, where some traitors in Yoruba land collaborated with some hegemonic structures to betray the late sage of great memory, Chief Obafemi Awolowo, and we will never allow history to repeat itself.”