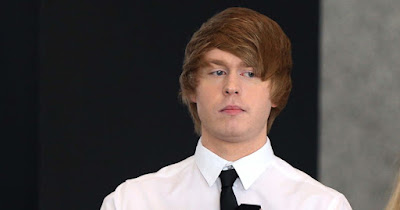 YouTube star Austin Jones has been sent to jail for 10 years after asking a string of teenage girls to send him revealing videos.

The 26-year-old American internet celebrity had already been under fire as long ago as 2015 for contacting underage fans and recording videos of them as he instructed them how to twerk.

Allegations then increased in 2017 to suggest he had encouraged underage female fans to making s-xually explicit videos while he again gave instructions.

The blond haired singer, who had over half a million subscribers to his YouTube channel and over 33 million views before the channel was terminated, was arrested in June 2017.


In February this year, he pleaded guilty to a single count of "receipt of child pornography" and was sentenced to 10 years in jail on Friday.

CNN reports that during the course of the trial, Austin admitted to encouraging six underage girls to make pornographic videos of themselves - with the girls in question being as young as 14.

"Production and receipt of child pornography are extraordinarily serious offenses that threaten the safety of our children and communities," Assistant U.S. Attorney Katherine Neff Welsh said as the YouTube star was sentenced.