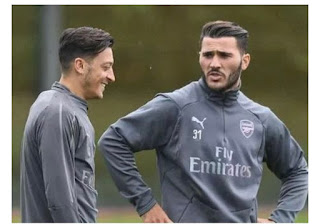 Police in the UK have confirmed that two men will appear in court next month after charging with a public order offence, in connection with an attack on two Arsenal footballers.

Arsenal also confirmed that Mesut Ozil and Sead Kolasinac would not play in Sunday’s opening English Premier League fixture at Newcastle due to “further security incidents”.

“Two men have been charged under Section 4a of the Public Order Act following an incident in Camden on Thursday. Ferhat Ercan, 27, and Salaman Ekinci, 27, were charged on August 9 following the incident and are due to appear at Highbury Corner Magistrates Court on September 6”  the police said in a statement.

Reports suggested the men were arrested after becoming involved in an altercation with security staff outside Ozil’s house. Section 4a of the Public Order Act refers to offences of intentional harassment, alarm or distress, through threatening, abusive or insulting words, behaviour or displays.

Arsenal said on Friday that Ozil and Kolasinac would not be in the squad travelling to Newcastle “following further security incidents which are being investigated by the police.

Email ThisBlogThis!Share to TwitterShare to FacebookShare to Pinterest
Labels: Gist